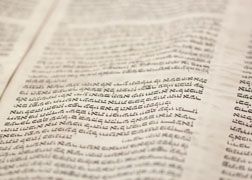 Wishing to share their collection with others led the couple to offer the university a Sefer Torah. The artifact is a powerful symbol and moving presence in Jewish worship and community life.

“The response [to the gift] has been overwhelming,” Johnson said. “I know it’s found a good home and it will be appreciated. That makes me feel good.”

The Torah will be preserved, held and safeguarded by the VCU Libraries’ Special Collections and Archives. An unveiling event is planned after the renovated library opens in 2015.

“We look forward to making this symbol of survival and hope available to our entire community for teaching, learning and remembrance, always with appropriate reverence and respect,” said University Librarian John E. Ulmschneider.

An interest in collecting old Bibles led to an interest in Torahs. Johnson described this Torah as “a monument to the survivors.”

The Torah scroll, on parchment scribed in the customary Hebrew, was composed in Romania about 1750. During World War II, it was confiscated by the Nazis. It is believed to be from an area of Transnistria, known as the Romanian Auschwitz.

Registration numbers and stamps confirm its provenance and that the scroll was held by communists. It was repatriated to Israel in 2003. Israeli authorities released the scroll for private ownership. It is considered to be in excellent condition, according to the rare books and manuscripts appraiser who authenticated the artifact.

“It’s quite possible that most students who take courses in religious studies at VCU, and even those who major or minor in religious studies, have never seen a Torah,” he said. “Having a Torah on display with the ability of opening it and reading passages from it, will be a unique opportunity for students to understand it from a visual and tangible perspective. In addition, it becomes an opening through which they can be motivated to study the Holocaust and all expressions of dehumanization in the world.”

The couple’s gift was generated via their existing relationship with the School of Medicine. In 2012, they made a generous donation to support the campaign for the school’s new building.

“Looking back, my time in Richmond was a good time,” said Johnson, who now lives in Phoenix where he teaches in the plastic surgery program at Mayo Clinic. “The educators at VCU were able to prepare me for a satisfying and fulfilling professional career. Years later, I was able to give back to the McGlothlin Medical Education Center fund. I’m a big believer in education.”

Jerry Strauss III, M.D., Ph.D., dean of the School of Medicine, is grateful for the couple’s ongoing generosity.

“This wasn’t the first time Marty and Olinda had shown remarkable generosity to our medical school, but — in this instance — it took quite an extraordinary form,” Strauss said. “We shared their desire to find the highest and best use for the Torah in our university community, and the VCU Libraries was a natural partner. By gifting this sacred document to Special Collections, Marty and Olinda have given it new life as a resource for generations of faculty and student scholars who’ll learn from its history and teachings.”