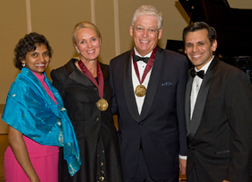 As chairman of Royall & Company, a direct-marketing company for colleges and universities, Bill Royall built a business by understanding return on investment and the importance of efficiency in process. Pam Kiecker Royall, Ph.D., previously chaired the Department of Marketing in the Virginia Commonwealth University School of Business and now heads up Royall & Company's research and issue analysis efforts. Both have an expertise in finding bottlenecks in business processes that result in inefficiencies that can delay progress.

Introduced to Massey Cancer Center several years ago by a friend, the Royalls quickly appreciated the importance of Massey's mission and developed an interest in directing their support toward lessening the time it takes to get new treatments through the often-cumbersome clinical trial process and to the patients who need them.

"The idea that utilizing our business expertise in a way that could impact important advancement in cancer research was extremely compelling," Bill Royall said.

An initial gift in 2008 helped fund a new clinical trial and supported promising translational research, but the Royalls were not satisfied that the more global process of clinical trials was affected the way they hoped.

"Recent analysis showed that a few proposed changes could reduce key phases of the clinical trial life cycle from 3½ years to just 14 months," she said. "This was a proposal we could get excited about!"

Ginder appreciated the Royalls' specific interest, which turned into a wonderful opportunity for Massey.

"Our partnership enabled us to take a new look at our obstacles and think about ways we could reduce or eliminate them," he said.

The result was a $1 million gift from the Royalls to fund a new system called Accelerate Clinical Trials (ACT) Now for Cancer Research, which will support two new positions — an additional scientific writer to help investigators write and receive approval on clinical trial protocols and a clinical trials budget negotiator to help navigate issues associated with trial costs.

"The two new staff positions will remove tremendous roadblocks for our researchers and allow them to focus on the science and turning that science into new ways to treat patients," Ginder said. "ACT Now is already having the impact the Royalls desired."

The scientific writer has already been hired and, within weeks, was moving previously delayed trials through the system.

"Our goal is the same as that of every supporter of Massey — to save lives and reduce suffering from cancer," Bill Royall said. "We are thrilled to be able to contribute in a way that reflects our business model of working smarter to achieve goals."

To learn more about the Massey Cancer Center, contact Molly Dean Bittner, campaign director for Massey, at (804) 827-0524 or mdbittner@vcu.edu.