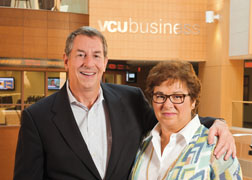 Mark Newfield (B.S. '87) came to Virginia Commonwealth University as an English major, but an accounting elective changed his life. It was in that School of Business class that he met professor John Sperry, Ph.D.

"It was a very fundamental class," Newfield said. "Sperry noticed that I was good at it and suggested that I consider a major in accounting. I took him up on the idea."

After graduation, Newfield set his sights on a consulting career and targeted Accenture, a global management consulting company, as his employer of choice. He landed an interview but didn't get the job. Later, he mentioned his disappointment to Sperry, whom he had come to view as his mentor.

"John called a managing partner here in the Richmond office whom I hadn't met and said, 'You need to give this young man a job,'" Newfield said. "The next day I got a call from the same person who had turned me down. I worked for Accenture in D.C. and was with them for 14 years. If it hadn't been for John, it never would have happened. John did that for a lot of people. He was incredibly positive of my capabilities."

Newfield wasn’t always so sure about his own potential. Though he did “reasonably well” at Northern Virginia Community College, the Washington, D.C., native thought a college education was out of reach.

“My two worries were ‘Am I smart enough?’ and ‘How am I going to pay for it?’” he remembered.

He worked full time as a bartender while at VCU and got married during his junior year.

"I did really well in my senior year,” he said. “My wife worked and I didn’t. My grades were substantially better.”

Pulling those two aspects of his college experience together — a wonderful mentor in Sperry and the ability to focus on his studies without financial worry — Newfield and his wife, Natalie, in 1999 established The Newfield Merit Scholarship in Business for incoming freshmen.

“The long-term objective is to provide full funding for deserving business students,” he said. “When I wasn’t worried about paying for my education, I did much better and thought if we could provide something like this for someone, it would be a good thing.”

Additionally, the couple recently made a planned gift through a $250,000 life insurance policy with a benefit to be equally split between the couple’s two passions: education and VCU Athletics.

“I know from my own personal experience that education is a weapon that strikes down poverty. If you want people to have choices in life, they have to be educated or be really lucky, and I chose education over luck,” Newfield said. “I got a great gift from VCU in my own education and from someone who thought enough of me to stick his neck out.”

Half of the policy benefit will be applied to the couple’s existing merit scholarship endowment in the School of Business. The other half will support athletic scholarships for student-athletes.

“I’ve always had an attachment for VCU because of my husband, but now I have my own attachment through basketball and watching these kids grow into men and women,” Natalie Newfield said. “It’s really wonderful to see, especially as a mother.”

Through their planned gift, she explained, the couple can make a significant contribution without it being a financial stretch.

“I couldn’t write a check for $250,000 unless I won the lottery, but as part of our financial planning, it’s a significant gift that we can provide over time,” she said.

Planned giving, such as the Newfields’ establishment of a life insurance policy in which VCU is named the beneficiary, presents a variety of options for donors. Mark Newfield is part of a university initiative to help educate alumni about the many ways to give back to VCU.

“Mark has agreed to help me as we plan to develop a new Office of Planned Giving at VCU. He has agreed to assist me with reviewing issues associated with planned giving and especially those strategies involving life insurance,” said Tom Burke (B.S. ’79; M.P.A. ’95), associate vice president for development and alumni relations and executive director of the VCU Foundation.

“We have many alumni and friends who might benefit from hearing about the strategies associated with planned giving,” he said. “Planned giving looks beyond the checkbook to estate planning and provides benefits aimed at helping alumni and friends reach their philanthropy goals while also reducing estate taxes or providing them a life income. Our ultimate goal is to enroll them as members of our Heritage Society so that we can recognize them for their support.”

“For me, successful giving is a function of finding something you love to do, then finding the way to do it,” he said.

To learn more about planned giving, contact Tom Burke (B.S. ’79; M.P.A. ’95), associate vice president for development and alumni relations and executive director of the VCU Foundation, at (804) 828-3958 or tcburke@vcu.edu.