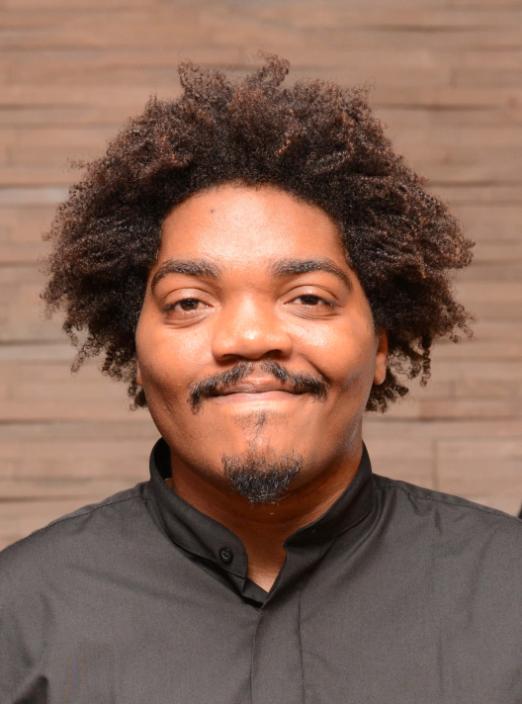 Kurt Nelson, 27, is on the verge of something big. A senior philosophy major in the College of Humanities and Sciences, he took part in the Go For It! student entrepreneurship program last summer, which opened some exciting possibilities for his fledgling company, Amicitia. Trouble is, he’s not at liberty to talk about them.

“I have three definitive paths in mind,” he says cryptically, “but I don’t want to say anything about any of them. It’s very exciting. I’m excited to wake up every day. But it is kind of like dipping your toes into a bigger pond.”

Nelson had already found success, albeit on a much smaller scale, with Amicitia and his pencil-and-paper role-playing game, “HavokRPG,” before he was accepted into the Go For It! pro­gram. A fan of RPGs – games where players assume the roles of characters in fictional settings – since he was young, he realized very quickly that not only were they expensive to buy, but they also did not allow the players the freedom to play exactly as they wanted.

At 20, Nelson set up a website with a friend, producing games that were community response-based, meaning that participants could offer their ideas for the direction of the plot. He started releasing the games for free.

“It wasn’t initially a business idea, it was just my hobby,” he says. “And then it turns out that people were willing to pay for it, and that’s kind of how it ended up being realized as a business model.”

Enter the Go For It! program, a three-month “pre-accelerator” for qualifying students’ startup businesses, wholly funded by philanthropic gifts from VCU alumni and friends and members of the VCU College of Humanities and Sciences’ advisory board. Nelson applied to participate to find advisers – “people who could tell me how you go about doing things properly or more efficiently.”

Go For It! was part of the university’s Venture Creation Univer­sity initiative, designed to provide every student with an entre­preneurial pathway. It challenged all disciplines to collaborate in building new programs that focus on everything from increasing a student’s exposure to entrepreneurship to product validation and company formation and even provided early seed funding.

The Go For It! program offered both hands-on and financial support to burgeoning student founders. It was a partnership among VCU Innovation Gateway in the Office of Research and Innovation, the College of Humanities and Sciences and Light­house Labs, which runs a full accelerator program for startups in the Richmond area.

The pilot program was offered to any current student who was pursuing or who already had earned a degree from the College of Humanities and Sciences. It has expanded this year and is now open to all VCU students under its new name, the VCU Pre-Accelerator.

From 42 applications that first year, seven student companies, including Nelson’s Amicitia, were ultimately chosen for Go For It! Each was given a stipend of $5,000 to take part in the program, which encompassed modules on customer development and defining a minimal viable product, prototype development and customer validation, and how to pitch to potential investors. The $5,000 was theirs to spend where the need was greatest. Some invested the money back into their business, while others used it for living expenses.

Every company was partnered with one dedicated mentor, an entrepreneur or investor from the Richmond region, and networked with many others throughout the program.

The Go For It! concept struck a chord with Mark Hansan (B.S.’84/H&S), co-founder of CareMetx, a provider of tools and support to drug and device manufacturers. He made a donation to support the program.

“I am thrilled to see VCU stepping up to provide valuable finan­cial support and encouragement for students at what is really the most difficult time – the beginning of a new company,” he says.

The program appealed to donors like Hansan because they saw it as something that could have helped them in the early days, says Bethanie Constant, senior director of development for the College of Humanities and Sciences. “I do think it is really an act of kind­ness as much as it is a gift of financial resources,” she says.

“When I was at VCU, there were no discussions relating to entrepreneurship outside a select group of faculty and students within the School of Business,” he says. “We need to be in a position at VCU where students feel they can approach faculty relating to an idea and have that faculty member encourage and empower them to pursue it.”

Go For It! was a perfect fit with the College’s strategic plan, which aims to provide opportunities for learning outside the classroom.

“The goal of the program was to provide a safe place for a small number of students to have these experiential opportuni­ties in building a business all the way from the concept phase through actually creating a product, selling a product, pitching it and getting additional investors, and to be able to do that with­out extreme financial risk,” Constant says.

That’s why, she adds, private support in the form of the stipend is so important.

“At VCU, most of our students have to work, and we didn’t want that to be a barrier to a learning opportunity. Our goal, in partnership with our donors, is that our students graduate with the greatest change possible in skills, disciplinary knowledge and personal growth.”

As the state budget contracts, Constant says, private support is more important than ever. “The Go For It! program simply would not have been possible without our donors.”

Nicky Monk (M.B.A.’02/B) is enterprise and economic development executive for VCU Innovation Gateway. She describes Go For It! as a mini-M.B.A., explaining that it made sense to run the pilot with the College because, with 50 per­cent of the university’s total students, it represented the widest student reach. She cites a 2014 survey of the total student population showing that 50 percent were interested in starting a company at some point.

“It allows them to understand how to validate a new idea, to identify if it’s a good business decision or not and what steps to take to get to initial revenue,” she says. “Regardless of if they go on to make that particular company a success or if they start other companies in the future, that’s a pretty valuable lesson.”

Connections were what Nelson was seeking from Go For It!, and connections are what he got. His individual mentor was Arnold Kim, M.D. (M.D.’00/M), founder of MacRumors.com, a website that aggregates Mac and Apple-related news, rumors and reports.

“He’s amazing,” Nelson says. “He helped a lot with the digital side of things, and how to figure out exactly the needs of my consumer base, and how to start appealing to those needs in a more efficient way.”

Nelson also picked up the support of TecHead co-founder Phil Conein, whom he describes as “a serial investor – just phenomenal.” The two connected during the “demo day,” when all the teams delivered their final product pitch to VCU faculty, community members, entrepreneurs and local investors. Nelson credits Conein with getting him an “in” with the two companies with which he is currently in talks about Amicitia’s future (he still won’t name them but concedes, “they’re both multinational”).

Since Go For It! ended, two of the student companies, C3 and Upchurch Chocolate Co., have been accepted into Lighthouse Labs’ full regional accelerator program, receiving $20,000 in funding to join other local startups in taking their businesses to the next level.

When designing Go For It!, Monk says, that was a primary goal.

“It was a pleasant surprise how quickly it happened and how successful we were, getting two student companies to apply and get accepted,” she says.

Alexander Burlingame is well aware of the advantage Go For It! gave his company, Upchurch, in getting into Lighthouse Labs. “In the interview process for Lighthouse, you had to pitch your idea, and Go For It! helped us refine our pitch, making sure that we can share this idea in a way that makes sense to most people,” the philosophy senior says.

For someone who’d never imagined himself as an entrepreneur, Burlingame says he thinks the course of his life has transformed.

“I applied for Go For It! kind of on a whim, not thinking I would get in,” he says. “Once I did, my whole world turned upside down, and I realized this whole entrepreneurship space is something I’m really interested in. I would never have realized that if it weren’t for the Go For It! program. And I believe that’s entirely going to change my career.”

Beyond the lasting impact that participation in Go For It! will have on these students’ lives, Monk sees even more benefits. Cit­ing the 2014 survey that revealed the extent of VCU students’ entrepreneurial aspirations, she says programs such as these will ultimately be a way of attracting the brightest and most innova­tive minds to the university.

“We are creating an environment that is very competitive with other universities as it relates to having education, infrastructure and capital support for students wishing to pursue an entrepre­neurial pathway.”

And that’s not all.

“As far as the local economy goes, there’s a lot of talk about how fast the local innovation ecosystem is growing. And I see VCU being a huge pipeline of entrepreneurial talent,” Monk says.

“The students are getting wonderful experience, no matter what career path they have. And if successful, hopefully, they will come back as mentors to other students, possibly as donors, and really have that affinity toward VCU and the programs that we want to support students.”