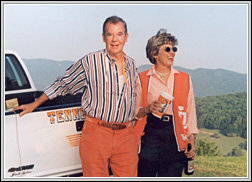 His answering machine message alerts callers they have reached “the Big Orange house” — he’s a proud graduate of the University of Tennessee.

He was married to his wife, Jane, for 46 years and calls the day he married her “the best day’s work I have ever done in my life.”

He also is devoted to Virginia Commonwealth University, for many reasons, and makes annual, unrestricted gifts to the university as a sign of his unwavering support.

Adair graduated from Richlands High School in Southwest Virginia as the No. 5 student out of a class of 127. During his sophomore year, he set his sights on a career in dentistry. He learned about a dental training program offered by the University of Tennessee, where students spent two years in Knoxville taking pre-dental classes and then moved to Memphis for three years of dental school. Most dental programs required eight years of study; this took only five, so he applied and was accepted.

“At the end of my second year, I had a 3.2 grade-point average, and I was not accepted to go to Memphis,” Adair recalled. “I went to talk to the dean and said, ‘I have Tennessee friends with a 2.5 and they were accepted, why wasn’t I?”

The dean explained preference was given to in-state students and promised Adair a slot in the next year’s class if he would spend one more year in Knoxville.

Adair did just that — and raised his GPA along the way. A year later, he was accepted to the Tennessee program, as well as the University of Louisville, where his grandfather completed medical school in 1892, and the Medical College of Virginia.

“I went home and talked to the local physicians and dentists in Richlands, and they said MCV was a better school than the other two,” he said. “So I went to Richmond and, thank the good Lord I did because there I met my bride, the light of my life, at MCV.”

Adair graduated from the MCV School of Dentistry in 1957 and returned to Richlands to practice with a fellow alumnus, Dr. David R. Stanton (D.D.S. ’54), for a short time before joining the Air Force.

After his tour of duty, Adair returned to MCV and accepted a teaching position in the School of Dentistry. He and Jane were married July 18, 1959, just as she was entering her final year of nursing school.

“I was just not going to let her get that close and not finish her degree,” Adair said. “Her mother and father were so proud of her and had worked so hard for her to get there.”

The couple moved to Richlands after Jane’s 1960 graduation and set to work establishing Adair’s practice. They worked together until the office was up and running.

As a nurse, Jane donated her time and talents throughout the community as a volunteer at the local health clinic, at her church and with other civic organizations.

“Jane never practiced for money, but she helped so many in our area, especially those with arthritis and breast cancer,” Adair said.

The Adairs raised two daughters who both followed their father (“with no arm twisting,” he said) to the University of Tennessee — Elizabeth Lee, who is a lawyer in oil and gas leases in Texas, and Anne Harman, who is a nonpracticing dental hygienist and, along with her husband, is the owner of the Blue Ridge Mountain Sports sporting-goods chain.

Over the years, the couple made gifts to the VCU schools of Dentistry and Nursing as a sign of their gratitude to and support for their alma mater.

“I grew up in a coal camp in a four-room house with no central heat. We had running water, and my dad was industrious enough to put in a bathroom,” Adair said. “But if you grow up in a coal camp, you learn the value of God, of friends, of integrity, of money and of giving back.

The Adairs also made trips back to campus, oftentimes bringing their children, to see their friends and classmates during Reunion Weekend. They watched appreciatively as their alma mater changed and grew.

As the university evolved, new buildings sprouted up throughout the city and others underwent significant renovations. Yet, support from the commonwealth of Virginia did not keep pace, echoing a growing trend in higher education across the nation, said Stephen D. Gottfredson, Ph.D., VCU provost and vice president for academic affairs.

“When I began my career as a university educator, about 75 percent of any public university’s budget came from its state’s general fund, and about 25 percent came from all other sources. And by all other sources, I mean tuition and fees, I mean private gifts and endowments and I mean federal, state or industry grants and contracts for research and services,” he said. “Today, 30 years later, that picture is just about reversed: About 25 percent of a major public university’s budget comes from its state’s general fund, and about 75 percent comes from those other sources.”

“VCU receives money from the commonwealth, but the university relies on unrestricted gifts to fund scholarships for outstanding students; professorships to attract and retain gifted educators and researchers; classroom and clinical improvements; and other pressing needs at the time,” he said.

The university cannot depend on consistent, significant funding from the state, especially in uncertain economic times, Wyeth said.

“Annual giving smooths out the peaks and valleys that we see in funding from the state,” he said. “The generosity of our annual donors makes a profound difference in helping to keep the university on a forward trajectory.”

Adair relishes the fact that his gifts can make a difference. After Jane Adair died in 2005 following a recurrence of breast cancer, her husband remains devoted to the School of Nursing, making annual gifts to the school in her memory. That philanthropy supports a scholarship program in the school.

“I hope my gifts, even though they are not huge, allow some students to obtain an education they otherwise might not have had the opportunity to do because their parents cannot afford to send them to school,” Adair said.