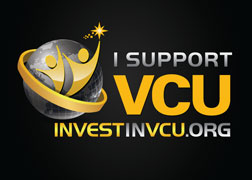 Two Virginia Commonwealth University alumni found a unique way to give back to their alma mater. Emmy-winning director and producer Jesse Vaughan (B.S. ’80) and his assistant, Bryce Spivey (B.S. ’10), volunteered countless hours to develop a moving video, “Invest in VCU,” designed to raise dollars for the university’s annual fund.

The video theme bubbled up from several focus group sessions with VCU students, staff, faculty and alumni who all agreed that whether one worked at or attended VCU, the sacrifices and commitments made were indeed a significant investment in one’s life.

In all, more than 30 people participated in the video, which calls on viewers to invest in VCU by making a gift at www.investinvcu.org.

A 60-second version aired regionally on TV during the Colonial Athletic Association men’s basketball tournament and the NCAA men’s basketball tournament. During the CAA championship game against Drexel, the spot was seen in more than 35,000 households. During the third round of the NCAA Tournament game against Indiana, 16.3 percent of all television households in Richmond saw the spot.

The campaign to invest in VCU students marches on. To date, the video has been viewed nearly 5,000 times on YouTube and is one of the primary focal points for the newly created Office of Annual Giving in the Office of Development and Alumni Relations.

“As an alumnus, this video gives me goose bumps and reaffirms my sense of pride in being a VCU grad. Anyone associated with VCU will be proud. Please watch it and share,” said Director of Annual Giving Strategy Michael P. Andrews (M.S. ’05).