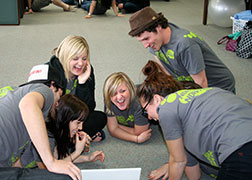 It’s 8 a.m. on a Friday during spring break. Fifty students from the School of Mass Communications at Virginia Commonwealth University have been thinking on their toes and stretching their creative minds for the past22 hours.

In just two more hours, they must present fully developed marketing and advertising concepts and materials to the 10 nonprofit clients they have been collaborating with all semester. The pressure is building as the third annual 24-hour CreateAthon onCampus draws to a close.

“Because there were 10 teams of students, professional mentors and grad student mentors, the energy in the building was great. If we needed a break, scooter races and dance parties were organized. It really is a fun and rewarding experience for all,” said CreateAthon participant Melissa Calabro (B.S. ’10).

CreateAthon onCampus is an expansion of the 24-hour, nationwide CreateAthon first produced in 1998 by Riggs Partners in Columbia, S.C., which began this creative blitz of bringing professionals to the aid of small nonprofits. In 2008, Rowe introduced the event at VCU, which became the first college in the country to participate.

“With CreateAthon onCampus, students are the primary creators so, in many cases, they are working with clients, teams and intense deadlines for the first time,” Rowe said.

For the past two years, the event has garnered continuous support from alumna Anna Lou Schaberg (B.S. ’66; M.Ed. ’70). As executive director of the Virginia Nonprofit Housing Coalition, Schaberg has a vested interest in community building and her involvement reflects that interest, she said. At Schaberg’s direction, the coalition has donated $48,000 to support the event.

“I was contacted by the School of Mass Communication because there is a scholarship there in honor of my father,” Schaberg said. “As it turned out, we shared a concern about developing strong PR materials for local nonprofits.”

The gifts from the Virginia Nonprofit Housing Coalition allowed the students to create more finished products, such as websites, logos and stationery, to hand to the nonprofits for implementation, Rowe said.

“No question that CreateAthon onCampus would not have continued after the first year if it hadn’t been for the generous support by Anna Lou Schaberg and the Virginia Nonprofit Housing Coalition,” Rowe said.

Now, Rowe hopes to implement CreateAthon onCampus at other universities. In fact, this past March, James Madison University launched a pilot CreateAthon program with Rowe’s help.

“What started as a two-page proposal three years ago will now become a national program,” Rowe said.