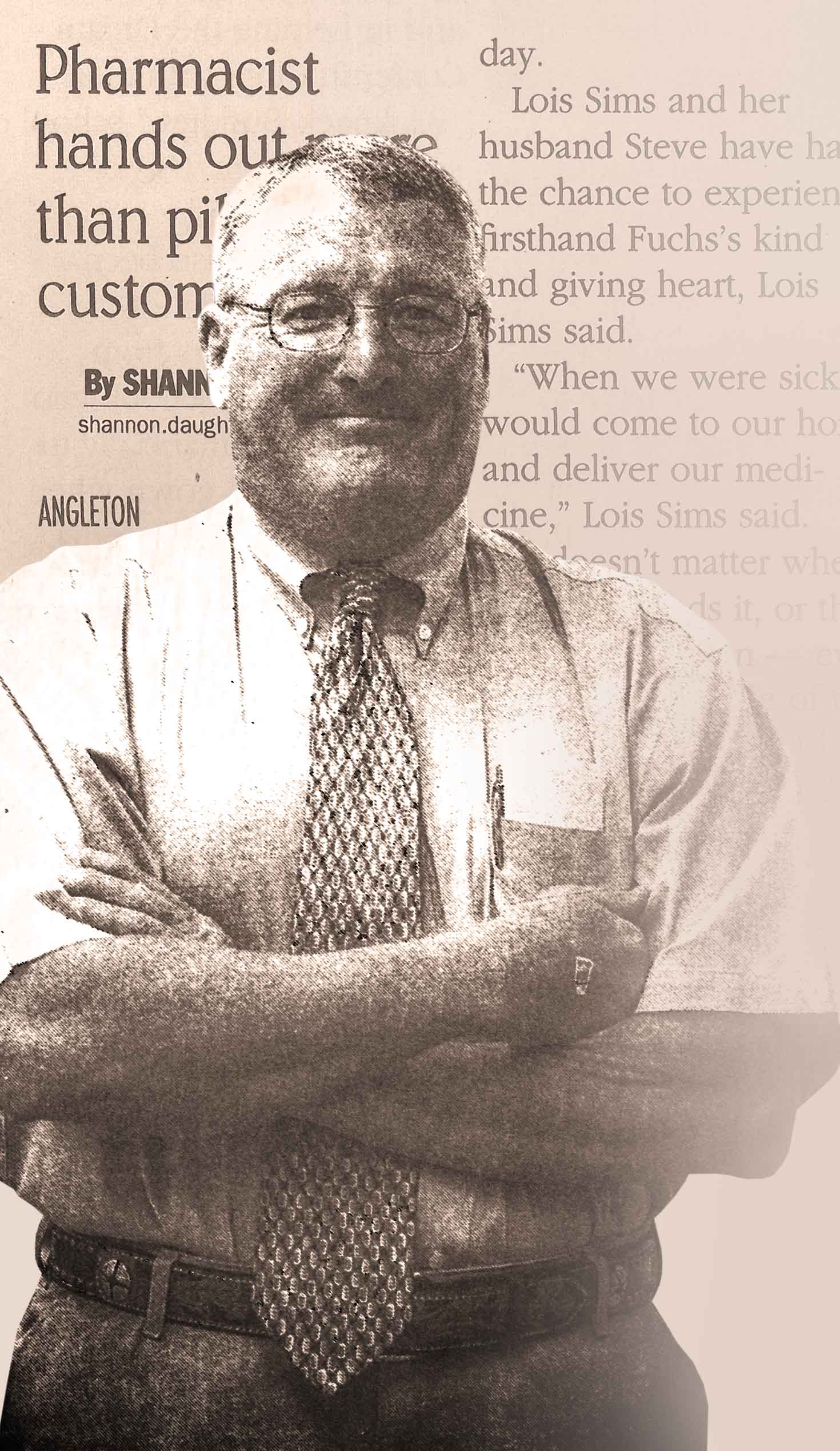 “Taking care of people” is what Patrick Fuchs describes as his forte in his career as a pharmacist. An assistant pharmacy manager at a Kroger grocery store in Angleton, Texas, Fuchs says he learned the personal touch from his father, who ran the local drugstore that the supermarket giant eventually bought.

“It was a typical down-home pharmacy,” Fuchs says of his father’s business. “When people came in, if they wanted advice, they got advice, and if they needed a kind word, compassion – those are things that my dad taught me.”

But his calling wasn’t always so obvious. In his first year as a pharmacy school student at the University of Texas, Fuchs ran into difficulty. “There were some courses I couldn’t pass,” he says. His grade point average dropped.

“I had to dismiss Patrick,” says Victor Yanchick, then-associate dean for student services at the University of Texas, who would go on to become dean of the Virginia Commonwealth University School of Pharmacy. Nevertheless, Yanchick sensed the young student’s potential. He coached Fuchs through his doubts about his future and made a call to a peer at the University of Oklahoma, where Fuchs was accepted to continue his studies.

The next year, a bond that was forged in Texas had the opportunity to grow stronger. “I became dean at OU, and I signed his diploma. So I am his second father, basically,” Yanchick says with a laugh. “I was very pleased that I had been able to get him into a pharmacy program. He’s a great pharmacist, as I always knew he would be.”

Now, in honor of Yanchick’s retirement last year from VCU, Fuchs has paid tribute to the support he received as a student by creating the Victor A. Yanchick Kappa Psi Leadership Scholarship. To be awarded for the first time in spring 2016, the endowed scholarship will provide tuition assistance each year to a member of the Kappa Psi fraternity who has demonstrated leadership and professionalism and who has made significant contributions to the school.

“I have been so fortunate in my life, and I know where it came from – God and Dr. Yanchick,” Fuchs says. “I couldn’t have done it without [him].”

As both men were members of Kappa Psi and cemented their relationship within the fraternity, it seemed only fitting to create a fund that benefits a fellow brother, he says.

Current VCU student and Kappa Psi Theta Chapter President Kyle Mullins, who should earn his Pharm.D. in 2017, echoes that idea. “We’re one of the only all-male chapters left,” he says, “and what makes us different is the closeness you get from that.”

Mullins says the Yanchick scholarship will alleviate some of the pressure on the recipient, adding that the selection committee could have a tough time choosing a recipient.

“We really have the leaders of the school … in our chapter. We’ve got the presidents of the Class of 2016, 2017 and 2018, the current student executive committee president of the school,” he says. “I think there are a lot of people who would be very deserving of that scholarship.”

Current School of Pharmacy Dean Joseph T. DiPiro, Pharm.D., says the scholarship will be awarded based on both merit and need, noting that student debt is one of the biggest problems faced in professional schools. “Students with a lot of debt often limit their job opportunities after graduation so that they can pay off the debt,” he says. “Reducing debt through scholarships will allow students to make better decisions about their careers.”

DiPiro’s predecessor agrees and adds that he hopes it will cause a ripple effect.

“I think what it will … show is that it’s very important for students to consider philanthropy as part of their requirement for continuing as a pharmacist,” says Yanchick, now the senior director of VCU’s Center for Interprofessional Education and Collaborative Care. “I hope it provides some financial help, but I think more importantly, it will demonstrate that it’s important for graduates to consider giving back to the school in whatever way they can.”

As for Fuchs, it has given him another way to fulfill his goal of taking care of people.

“I just hope that it makes their college experience a little bit better,” he says of the students chosen to receive the scholarship, “and they’ll be able to, in turn, show the leadership that I was shown in Kappa Psi, and be able to help other students.”