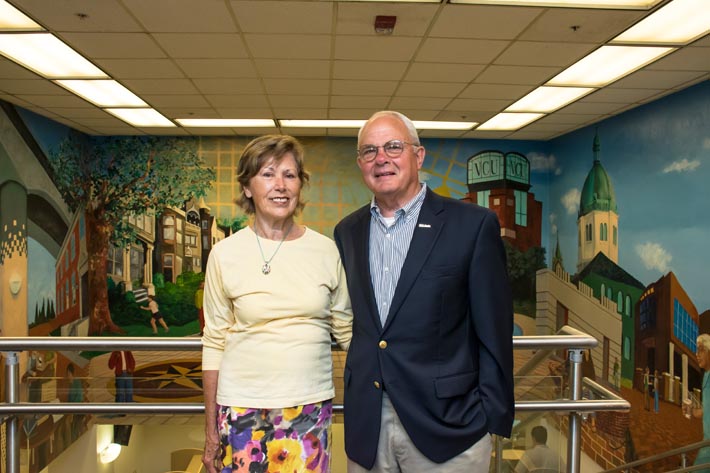 Jim Moore’s roots at Virginia Commonwealth University run deep. That’s not because he’s an alumnus, though he did take night courses in the ’60s and developed a longstanding love for the university’s diverse urban environment and its people.

His mother, Martha Riis Moore (B.S.W.’37/H&S), was the oldest alumna of the Richmond Division of the College of William and Mary, VCU’s precursor, when she died in 2008, and his brother John R. T. Moore (B.A.’73/H&S) studied English at VCU. His wife, Betty Moore (B.S.’65/E), celebrated her 50th reunion this year and is a steadfast partner in his
VCU philanthropy.

The Moore family created an endowment in 1989 in honor of John Riis, who was a well-known journalist at the Richmond News Leader. He was the son of acclaimed photographer Jacob Riis, Jim Moore’s great-grandfather.

But Moore’s engagement with the VCU Libraries can also be traced to its Special Collections and Archives, where many of his family papers are now housed. Moore’s late mother, a newspaper reporter and social activist, donated her personal papers as well as the John Riis Collection, which reflects the courtship of her parents. Moore, too, has given family papers to Special Collections and Archives.

Over the years, Jim Moore has demonstrated his allegiance to VCU through hundreds of volunteer hours as a member of the Friends of the Libraries Board. Most recently, as immediate past president of the board, he made a gift to the new Seat-a-Student initiative, which will add about 1,500 seats to the new library building under construction on the Monroe
Park Campus.

“The VCU Libraries has done a stellar job of providing services to students,” he said. “When you see what they’ve done with a 40-year-old building, it makes it even more exciting to see it come into the 21st century. The emphasis is on making the facility student-friendly. It’s 100 percent different than when I was in college, going to the card catalog. Everyone was quiet. Today, there’s so much interaction among and between students and so many opportunities for learning right in the library. It’s the energy of VCU generally but of the library in particular.”

Gifts of any size can help make a world of difference to the student experience, Moore says.

“People of modest means help make this university great,” he said. “VCU is appreciative of each and every gift. And it shows. University Librarian John Ulmschneider sends handwritten notes of thanks, and that mindset carries through all staff. It makes you want to give.”

Moore’s years of service to VCU are much appreciated by all who have worked with him over the years.

“Jim Moore demonstrates every day that energy and dedication to a cause is just as important and effective as financial contributions,” Ulmschneider said. “Jim provided formative leadership to the board as president, and as a member, he has conscientiously attended virtually every event and gathering sponsored by the Friends of the Library. It’s hard to imagine more effective service on behalf of VCU than those many individual acts of kindness and outreach – or a better example for all of us to follow.”