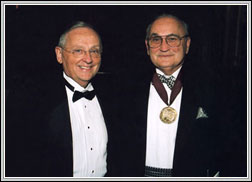 Although William O. “Bill” Jones never attended Virginia Commonwealth University, his strong relationship with the university makes him seem like an alumnus.

Jones’ link to VCU was established while watching two family members — his wife, Gaye, and daughter Jennifer — complete graduate school at the university. Over the years, Jones even got hooked on VCU athletics, becoming such an avid Rams fan that he held season tickets to basketball games even while living out of town on business for six years.

In 2003, Jones demonstrated his appreciation to VCU and pride in his wife, who earned a degree in social work, by establishing the Gaye Shinall Jones Merit Scholarship. While Jones endowed the scholarship in the School of Social Work along with his wife, his intention was to express admiration for his wife’s efforts and perseverance in attending graduate school.

The award is given to an entering freshman with an interest in pursuing social work as a career and can be renewed annually if the student maintains a B average. The Jones Merit Scholarship has been awarded once since the fall of 2004 and will be given again to a student this fall.

“I chose to honor my wife because of the hard work she put in trying to create a lot of alumni interest in the School of Social Work,” Jones said. “I thought it was a good way to tell her how much I appreciated her drive to get her education.”

By the time his daughter earned her master’s degree from the Department of Theatre in December 2005, Jones was ready to help future students in her name, too. This time he was inspired to give out of gratitude for the great treatment his daughter received while studying in the School of the Arts and admiration for her work as “a full-time mom, full-time teacher and full-time grad student.” His gift came earlier this year in the form of the Jennifer Jones Hundley Graduate Theatre Scholarship, and, although the criteria are still being discussed, Jones said he hopes it will be awarded to students based on accomplishment and need.

The many hours his daughter put in were certainly worthy of recognition. She starred in a feature role in the department’s “The Civil War” musical in April 2005 and wrote and directed her own thesis, “Carry Me,” which was produced at the Shafer Street Playhouse.

Noreen Barnes, director of the graduate program in theatre characterized Jennifer as one of the program’s best students. While studying, Jennifer successfully balanced teaching theater full time at The Collegiate School with her VCU classes and family life, Barnes said. Now, she said, this scholarship will live on as a symbol of Jones’ dedication to his daughter.

David Leong, chair of the Department of Theatre, said the Jones Scholarship signaled an important change for the program because it is the first award offered at the graduate level.

The Joneses’ generosity has touched another aspect of VCU as well: athletics. Because of their fondness for the Rams, Bill and Gaye wanted to give students a boost by funding a men’s basketball scholarship. They established the award in 2003.

Bill Jones has never taken his eye off the ball. He still strives to build up the William O. Jones Scholarship for Men’s Basketball, serving twice as chair of the Rams Club Golf Tournament, which donates most of its proceeds to the scholarship.

Retired from insurance and financial services company American International Group Inc., Jones remains active in philanthropy. Since his wife’s death in January 2005, he has continued giving gifts to help more students’ dreams come true by supporting the funds he established.

Last year, Bill and Gaye Jones became members of the VCU Founders’ Society, a group that recognizes those who have made deeply generous commitments over a lifetime.

Jones, who currently serves as president and chief executive officer of a national insurance marketing organization, said people who want to donate should consider the memories they can immortalize through giving.

“I think they need to understand how far the university has come and how much further it can go,” he said. “By donating, they honor the hard work of a lot of people.”

For information about donating to the Gaye Shinall Jones Merit Scholarship, contact Terry Anderson, director of external affairs in the School of Social Work, at (804) 828-0410.

For information about donating to the Jennifer Jones Hundley Graduate Theatre Scholarship, contact Jacquelin Crebbs, associate dean for development for the School of the Arts, at (804) 828-2787.