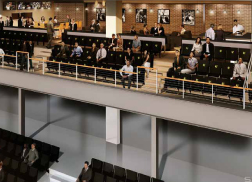 A $3.5 million enhancement project is under way to add a club environment at the Virginia Commonwealth University Stuart C. Siegel Center for basketball fans, friends and new recruits.

"The enhancement project is a game changer for the Department of Intercollegiate Athletics and the university," Teague said. "It's going to supply advantages that are significant."

Advantages include an enhanced game experience for basketball fans and a clublike venue for cross-campus entertaining events for alumni and friends. The project also provides a revenue stream from seat sales to help support scholarships and defray costs associated with student athletics, such as travel and equipment.

"It's going to be really extraordinary," Teague said. "Any fan or alum who experiences it will be proud."

A new upscale recruiting environment, he said, will provide a museumlike space to display the history and tradition of VCU's strong athletic programs through photos and trophies.

Designed by HKS Inc., architects of the new Dallas Cowboys stadium, the Club Seat and Suite Project will add 200 seats, each with a balcony view of the Verizon Wireless Arena. In addition, a new Founders Club will feature permanent bars and bar-top counter seating and will draw on Richmond's architectural influences by incorporating exposed brick and other elements. A new University Suite will serve as an entertainment hub for donor events.

Both men's and women's basketball office renovations also are a part of the project.

Work will begin this summer with completion expected by November.

The greater Richmond area also will benefit from the Club Seat and Suite Project.

"It's staggering how many people from outside VCU come through the Siegel Center in a given year," Teague said. "It's not too small and not too big. We attract a lot of diverse events such as areawide high school graduations, concerts, tennis matches and conventions."

The new areas, available for community use, will provide a showcase for VCU athletics as well as for the university.

Stuart C. Siegel, the building's namesake and member of the VCU Board of Visitors, the VCU Health System Authority board of directors and the Executive Athletic Board, agrees.

"The Siegel Center serves the entire community," Siegel said. "It's gone a long way toward putting a wonderful face on our university."

Siegel and his wife, Dawn, have pledged $500,000 to the project, which will be funded entirely by private donations.

"Dawn shares my enthusiasm for this project. We've long been advocates of VCU athletics. It's what attracts students and represents us well," he said.

Teague is thrilled at the opportunities these enhancements will provide, especially in the wake of the men's basketball team's recent history-making Final Four run.

"The Club Seat and Suite Project will allow us to capitalize on our basketball success and further establish VCU as a nationally significant college basketball program," Teague said. "The magnitude will be felt for years to come."

To learn more about the project, contact David Benedict, senior associate athletic director for development and external relations, at (804) 828-7474 or dbenedict@vcu.edu.