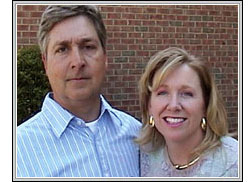 When Will and Betsy Cutler decided to endow a scholarship for the Virginia Commonwealth University Golf Program in 2006, they knew that making the $100,000 gift would help them enjoy their passions in life — golf and college athletics in general. The pair is now taking pleasure in reaping many other rewards from making that gift.

As alumni of Virginia Tech and VCU, respectively, Will and Betsy wanted to give back to their alma maters by donating to athletics funds at both universities. At Virginia Tech, the couple established an endowed scholarship, but the money eventually was funneled to funding for the Lane Stadium west side expansion because football scholarships were already topped out. At VCU, they saw their endowed scholarship evolve differently.

“We decided to endow a scholarship at VCU because it is a more personal form of giving,” Will said. “When donating to a stadium or building fund, you are not as involved in the giving process. Endowing a scholarship really enables you to see the product of your gift in another person.”

Betsy agreed that the personal connection is so important.

“We will enjoy getting to know the recipients of our scholarship and are excited that we get to meet new recipients every four years,” she said.

The Cutlers have gotten to know Lanto Griffin, the current recipient of the Cutler Scholarship for the VCU Golf Program, quite well. Griffin, a freshman who plans to major in marketing, grew up in Blacksburg, Va., where the couple has friends and owns a home. He also plays golf at the Blacksburg Country Club, where the Cutlers are members.

The Cutlers said they enjoy watching Griffin play golf and attend as many VCU golf tournaments as they can. Griffin and VCU golf coach Matt Ball update the Cutlers on Griffin’s performance at the tournaments the couple misses, and they often check up on him as well.

“I have the Cutlers’ [phone number] in my cell phone, and I told them that if they ever needed a baby sitter that I would be happy to help them out,” Griffin said.

Griffin has played in every tournament this season and has had three top-five finishes so far. The scholarship has helped him succeed because he can concentrate on his academics and playing golf, rather than worrying about student loans, he said.

To the Cutlers, one of the greatest benefits is the recognition and friendship VCU has offered. In addition to thank-you letters, the Cutlers said they receive phone calls and invitations from coach Ball to play their favorite sport — golf, of course. In addition to those invites, the pair is also asked to attend many donor and university events, such as an annual scholarship dinner.

“Attending donor events and functions at VCU is a great way for us to meet other donors and make lifelong friends through the process of giving,” Betsy said. “[Giving] is a win-win situation all the way around.”

The Cutlers are pleased that they are making such a difference in students’ lives.

“We hope we can give potential students the opportunity to come to VCU, without bills and debt, and play the sport of their choice while focusing on academics,” Betsy said.

Every four years, a new recipient, chosen by the golf coach, will be awarded the Cutler Scholarship, based on their golf performance, their character and their promise as an athlete at VCU. When selecting a scholarship winner, Ball said he tries to make the best possible fit between the donor and the recipient.

“Lanto and the Cutlers had some contact before the year started, so I felt that awarding Lanto the scholarship would be some common ground for them to talk about,” Ball said.

Betsy also offered some advice to potential donors about endowing a scholarship.
“[They] need to understand that giving is not only a great benefit in helping personally, but giving back to a larger cause.”