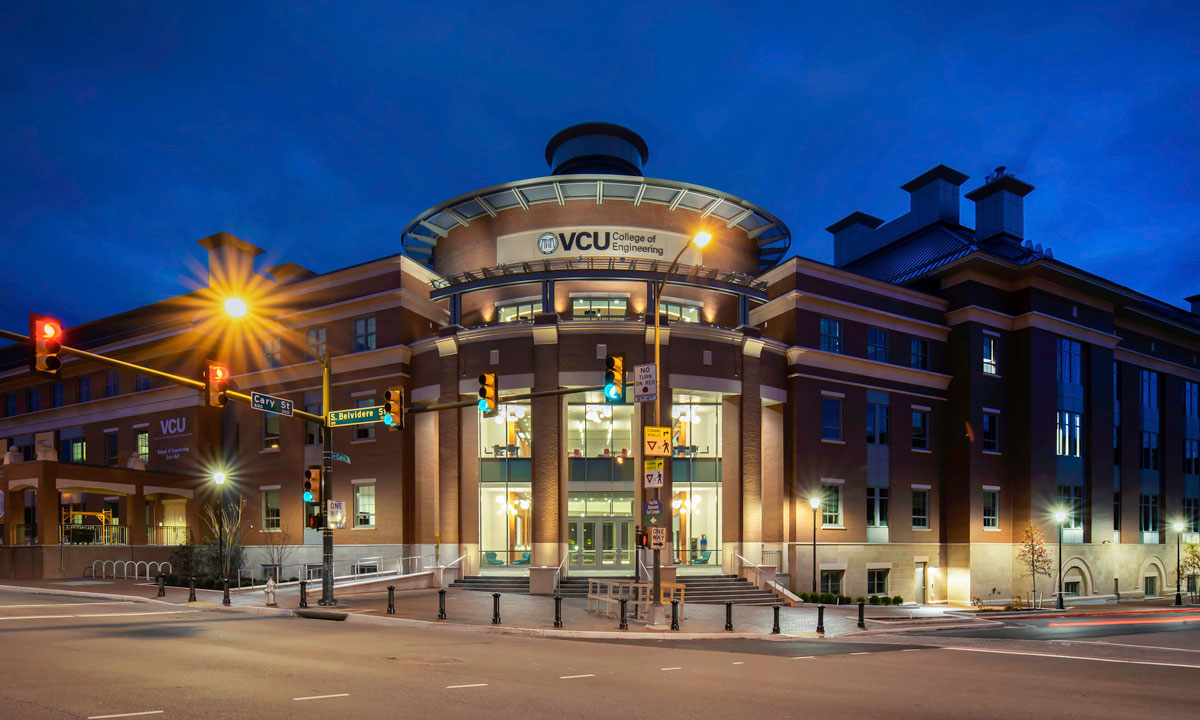 The grand opening ceremony took place virtually and featured a ribbon-cutting by university leaders, the architects and construction crew, and greetings from elected officials, including former Virginia Governor Terry McAuliffe, and members of the community. The event culminated with a tour of the new building and grounds.

“This brave new space is going to serve as part of a bold, advanced innovation corridor for VCU’s College of Engineering,” said VCU President Michael Rao, Ph.D., to the hundreds of audience members who attended via Zoom. “It’s a great place where diverse talents will meet with the common goal of advancing humanity through practical, state-of-the-art, compassionate solutions to important problems. It’s a place where the future will be invented.”

Noting that more than 90% of VCU’s engineering students are in-state, and more than 75% of the college’s graduates make their careers in Virginia, Rao added that “this great new facility affirms the fact that VCU’s College of Engineering is the commonwealth’s engineering school.”

The ERB extends and connects the building shared by VCU Engineering’s East Hall and the VCU School of Business’ Snead Hall. Its fully equipped Collaboration Hub and Innovation Courtyard, expected to be the social heart of the complex, are designed to knit together the three buildings in an open, light-filled space.

“When you have the opportunity to be in here and look out the windows, you will see students from engineering, art and business sitting together with their faculty. They will come up with new ideas, get their laptops out, create new inventions, build new companies,” Boyan said. “I think that speaks well to the bedrock of our foundation. We were begun as a public-private partnership, and our students will be the workforce, throughout Virginia — and they are educated in an atmosphere that partners industry with universities every step of the way.”

The design also features specialized workspaces. One of the most notable of these is the Innovation Maker Facility, a makerspace supported by a donation from Altria and equipped with resources for hands-on prototyping and creative, experiential learning.

The look of the ERB continues the VCU Engineering tradition of modern buildings with architectural details from past eras of engineering advancement. Engineering West Hall’s ziggurat, pyramid and post-and-lintel doorways refer to ancient Babylon and Egypt, while East Hall’s tower and rounded arches suggest the Renaissance. The ERB’s red brick and cast stone construction and its roofline with updated smokestack forms recall the 19th-century dawn of industrial engineering. The building’s focal point, the rounded “spaceport” at the corner of Cary and Belvidere streets, gives a nod to future innovation.

“It just gives you a feeling of what engineering is all about,” Boyan said. “It's solving problems. The whole engineering way of thinking is captured in this building.”

A version of this article was previously published by the College of Engineering.

To learn more about the College of Engineering, contact Brian Campbell, executive director of development, at becampbell@vcu.edu.