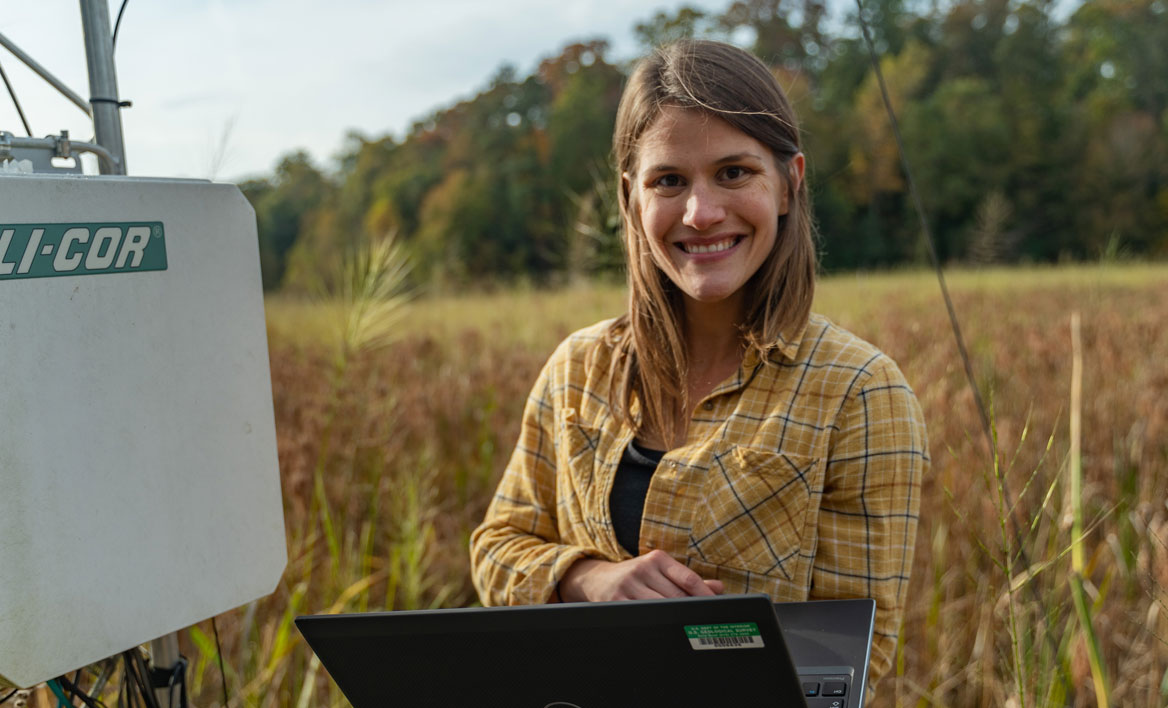 Ellen Stuart-Haentjens, Ph.D. (Ph.D.’19/LS), spent much of her time wading through wetlands while studying for her Ph.D. in Integrative Life Sciences at Virginia Commonwealth University. Her research on forest and wetland carbon storage produced findings that could help predict and mitigate future effects of climate change.

“Knowing how climate change is impacting how much carbon these ecosystems can store now helps us make predictions of future ecosystem health,” she says. “When carbon is stored in our natural ecosystems, it prevents it from being where we don’t want it: in the atmosphere, contributing to climate change.”

Stuart-Haentjens discovered her passion for ecology and research during her undergraduate education at the University of Richmond. After she joined VCU for her graduate education, she had two children.

“It was difficult going from just being a graduate student to being a mother while working toward my degrees,” she says. She remained dedicated to her research projects with help from her extended family and partner, but they had work obligations, too. There were times when their responsibilities seemed overwhelming, she says. “We had to arrange for child care and figure out how to pay for that while traveling and working long hours. I wasn't sleeping very much at all, but we got through it and it taught me a lot.”

One thing she did not have to worry about, she says, was funding to sustain her research projects. During her time at VCU, Stuart-Haentjens received several awards, including the Thomas F. Huff Graduate Scholarship in Integrative Life Sciences, awarded annually to a Ph.D. student conducting interdisciplinary research relevant to the mission of the VCU Rice Rivers Center. The scholarship was established in 2015 with gifts totalling $100,000, including $72,000 from Burt Adelman, M.D., and his wife, Lydia Rogers, to honor the memory of their friend Thomas F. Huff, Ph.D., VCU’s inaugural vice provost for life sciences and research..

Adelman and Huff met on the MCV Campus at VCU as medical faculty in the 1980s and remained close friends until Huff’s death in 2015. When Huff shifted his focus from biomedical research to field biology and natural science, Adelman was unsurprised, he says.

“Tom was wonderfully smart, and he was enthusiastic in his fascination with all things intellectual,” Adelman says. “He loved the adventure of science. His passion was in making all avenues of scientific investigation available to students, and he was so excited about his role in establishing the Rice Rivers Center. Knowing how important it had been to Tom, it was a pleasure for Lydia and I to be able to provide some funding for graduate students in his memory.”

The Huff Scholarship helped Stuart-Haentjens buy top-of-the-line equipment to elevate a project measuring how stocks of carbon in wetland soil are affected by tidal changes.

“Tidal freshwater wetlands are a really understudied ecosystem,” she explains. “The way tides move into and out of wetlands is slower than it is in the river, so I knew nearby river gauge measurements would not be as precise as I needed them to be, and I knew it would matter. The Huff money allowed me to purchase an array of loggers that can measure the tide with high precision. I was able to put them at each of my sites in the wetland and then tie that data to the movement and storage of carbon. That has been crucial because we know tides are important, but we don’t yet know to what extent.”

Robert M. Tombes, Ph.D., Huff’s successor as vice provost for life sciences and research, says that with support from donors like Adelman and Rogers, VCU Life Sciences students are working to improve the state of our natural world.

“Support for student scholarships has twice the impact because it directly benefits the student but is tangible to the donor who can experience the benefit,” he says.

Now that she has graduated, Stuart-Haentjens is continuing her wetland research in a new position with the U.S. Geological Survey. She hopes her career will enable her to advance efforts to mitigate climate change. Knowing that the Huff Scholarship is advancing the work of rising climate-change scientists like Stuart-Haentjens gives Adelman hope for the future, he says.

“Climate change is one of the most critical threats to our society and to the world,” he says. “The Rice Rivers Center is providing learning and training opportunities to young scientists who will actively participate in solving these problems. Thanks to Tom, we’ve had the opportunity to make a small contribution to a meaningful effort to train scientists who will be involved in climate-related research that will impact the future of all of our lives.”