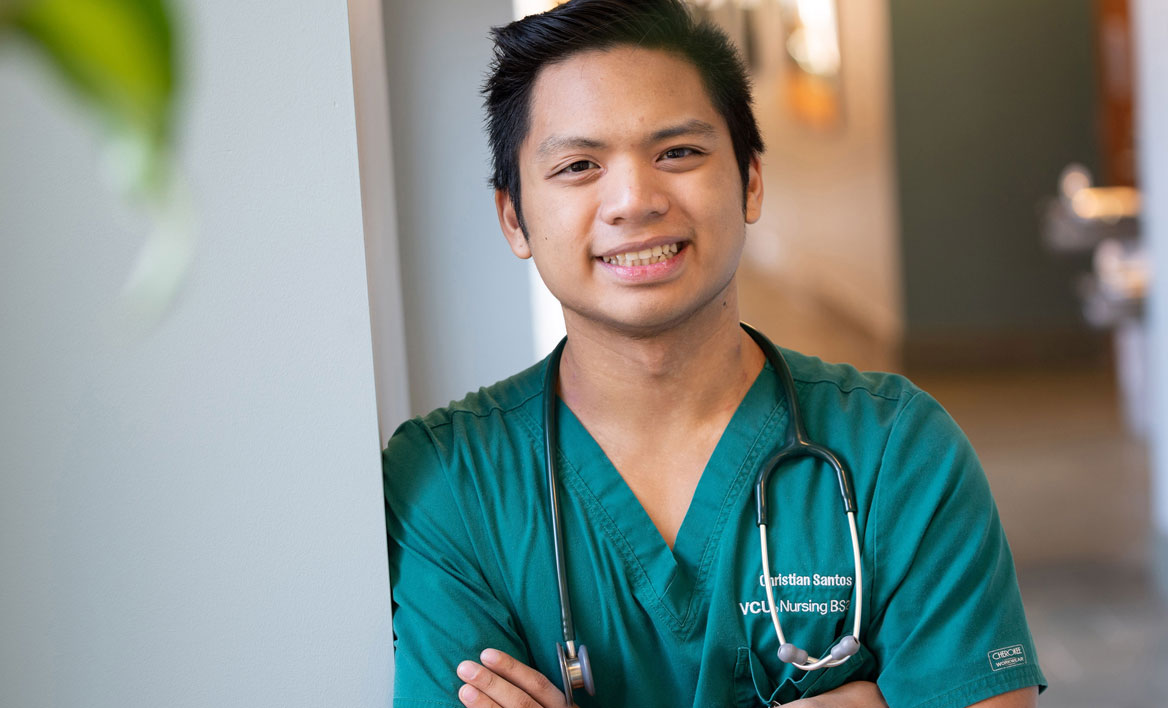 You could say that Christian Santos’ journey to Virginia Commonwealth University began decades ago, when his grandfather, an engineer in the Philippines, was recruited by the U.S. Navy as a part of policy that encouraged the military to enlist Filipinos.

He ultimately became a U.S. citizen. Seeking a better quality of life, Santos’ parents and two siblings began the process of immigrating to the U.S. about 25 years ago. Santos was born shortly after his family immigrated.

“It was very hard on my family,” Santos says. “My mom and dad had a life together in the Philippines, and they already had my two older siblings. It’s hard to uproot all these lives, to leave behind friends and family, and start over in another country. But they knew the sacrifice was worth it. Opportunities for education and a career are so much better here.”

When his parents first arrived, they worked at his aunt’s bakery in Virginia Beach, Virginia. Now, his mother works in a beauty shop. His father recently left a job as a manager for Dunkin’ to work for a sign manufacturing company.

The move allowed Santos to get a good education, with excellent career prospects, but starting over in a new country put a financial strain on the family.

“Growing up, there were definitely times when my family’s financial security was in question. I remember my mom laying out all her dollar bills in the living room, trying to figure out how to move money around to pay the bills and keep a roof over our heads,” Santos says.

THE BURDEN OF SACRIFICE

Today, Santos feels a sense of responsibility to succeed and to achieve his parents’ version of the American dream because of the sacrifices they made for him to grow up in the States.

“When I told my dad that I got into nursing school, he was very emotional,” Santos says. “In his mind, this is where his sacrifice went. In a way, it makes it all worth it for him.”

Santos hopes to graduate from the VCU School of Nursing this spring and work for VCU Health as a nurse. He is confident that his achievements have honored his family’s sacrifices, but as a first-generation college student, the journey was not easy.

“As a first-generation student, I’ve had to figure out a lot of things on my own,” he says. “It made me grow up faster, especially when it comes to managing my own finances and making sure I can afford to keep coming back to VCU. My family isn’t in a position to support me financially. But I wouldn’t be where I am without their love, support and sacrifices. However, being first generation has also offered me a sense of freedom and independence.”

Santos’ accomplishments as a first-generation college student are a combination of work ethic, intellect and timely scholarship support. He is a recipient of the School of Nursing Endowed Scholarship and the four-year Provost Scholarship.

“That I am in college is a huge source of pride for my family,” Santos says. “I would not be here without these scholarships.”

THE POWER OF GIVING

Mildred Neagle (B.S.’68/N; M.S.’89/N; Cert.’06/N), a triple alumna from the VCU School of Nursing, is one of the many donors to the Nursing Endowed Scholarship Fund.

“I appreciated the scholarship money I received from VCU when I was getting my master’s degree,” Neagle says. “Now that I’m at a point in my life where I have some extra funds, I wanted to give back to the school and help other people who need financial aid.”

“It’s important for our school to support the dreams of highly talented students like Christian who often face unique challenges,” says Jean Giddens, Ph.D., RN, FAAN, dean and Doris B. Yingling Endowed Chair of the VCU School of Nursing. “Scholarships help to ease the financial burden, allowing students to focus their time and energy on their education rather than on how to fund it.”

The scholarships, Santos says, have provided him with a sense of security and freedom from worrying about bills, rent or tuition. He can focus solely on his studies and making connections with faculty and colleagues. As of now, Santos has only $7,500 in student loan debt, with no plans to increase the amount in his final semester. As of 2017-18, the average student loan debt for a bachelor’s graduate of the VCU School of Nursing was $20,696.

“When I think back on my college experience, the main emotion I feel is gratitude,” Santos says. “I was given an amazing opportunity because VCU took a chance on me.”

To learn more about the School of Nursing, contact Pam Lowe, senior director of development, at (804) 827-0020 or plowe@vcu.edu.